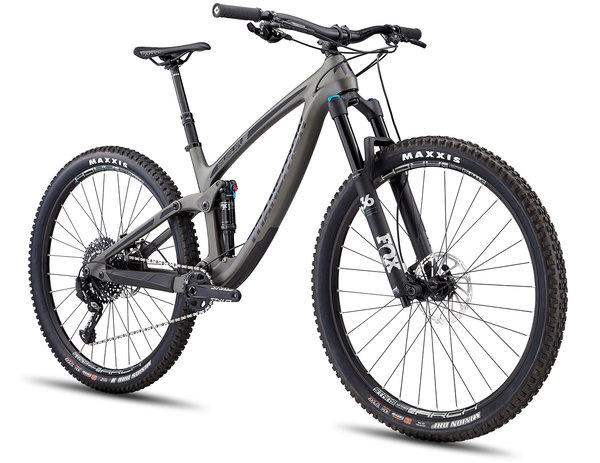 This item is currently not available.

To purchase any new Transition mountain bikes give us a call, stop in, or just pop one in your shopping cart and we'll call you when the bike built and ready to roll.

Since we first rode the Transition Smuggler Carbon GX, the conversation has changed about what makes a great trail bike. Our crew can't stop raving about the breadth of capability in just one bike. They've test ridden the Smuggler over extreme and tame terrain and have never been quite so impressed...even the most skeptical among us. The fun meter is pegged! The magic of Transition's progressive geometry makes for killer climbing, cornering, and descending.

Here's what Transition has to say about their bike: The Carbon Smuggler GX sits right in the middle of our lineup with a rock solid spec for those looking to save some money but don't want to compromise on performance. We don't skimp on the suspension and give you the perfectly tuned Fox DPS inline rear shock paired with a top of class Fox Float 36 Performance fork to handle the rough stuff up front. SRAM Guide R brakes control the 29" wheels and have incredible modulation while the GX eagle with 10-50t rear cassette give you all the gear range you will ever need. A Stans Arch S1 Team wheelset with Maxxis Minion 3C tires balance durability with traction and control to give you confidence on any type of trail.

Speed Balanced Geometry - SBG ensures the bike maintains low speed agility, front wheel traction, and proper rider weight balance while actually increasing confidence in steep terrain and at high speeds. With SBG, a slacker head tube angle is combined with a all new reduced offset fork standard, preventing the front wheel from being too far in front of the rider. This improves front to rear weight distribution on the bike, which is often out of balance on long and slack bikes. One of SBG's greatest benefits is that it creates a confident steering feel that adapts to wheel speed. More stability when going fast, more agility on technical slow speed maneuvering as well as improved traction, control and confidence for any skill level of rider.

We specifically tuned the suspension with a moderate amount of chain growth which is highest at the sag point and decreasing deeper into the travel. Because of this finely tuned wheel path, there is a notable increase in traction when climbing, without the rider noticing the chain growth fighting the suspension movement.

GiddyUp 2.0HH Suspension is extremely easy to setup and it provides excellent support throughout the entire stroke of the shock so you can use all your travel without worrying about bottom out. Designed to be active while climbing, rear shock climbing platforms are not necessary. The suspension remains free to smooth out the trail, improve traction and control without sacrificing efficiency. With GiddyUp 2.0HH you can focus on the trail, no remotes, levers or knobs. Just grab your bike and GiddyUp.


"The Smuggler is all about fun, first and foremost. It's a bike that encourages its rider to goof off, whether that's by seeing how many mid-trail manuals you can pull, or trying to find out just how hard you can smash into a bermed corner. Sure, you can't go rocketing full blast into a minefield of rocks and expect to come out the other side as easily as you would on an enduro race machine, but that's not what this bike is all about. Instead, it's about finding the bonus lines, the hidden lips and landings that make a familiar trail even more entertaining. " - Mike Kazimer/Pinbike.com

"Transition trail bikes have become known for their aggressive, descending-oriented handling and the Smuggler rings true in that regard. Simply get the Smuggler up to speed and it charges through rough terrain with the stability and ease of a bike with considerably more travel." - THE BIKE BIBLE REVIEW

* Subject to change without notice.