The Cast of Original Characters

Neil worked at R L Dothard Associates, in Guilford, a book and magazine design firm. Neil had started X-C skiing while helping with the production of, and reading, Johnny Caldwell first X-C book in 1963. He got his first equipment from Johnny (used; $35 for skis, boots, bindings, poles, ca. 1963-64) which eventually got him acquainted with some of the Putney skiers.

RLDA hired Bob Anderson (ca. 1969-70), who had been a designer at Houghton Mifflin in Boston. Bob & Becky had just returned from traveling in Europe and England touring and racing bicycles. Bob was also a cross-country skier, and it was his idea for us to ride bikes in the summer as training for skiing.

Bob George was a free-lance photographer, whom Neil had met when RLDA used him for assignments. Barbara George had grown up in Putney, so they both knew the territory and had both done some X-C skiing.

Bob Gray, and his wife Susan, were working at The Putney School. Bob was one of the top X-C skiers in the US. In the late 1960s he had already been racing and training on bicycles in the off-season.

And They Were On Their Way 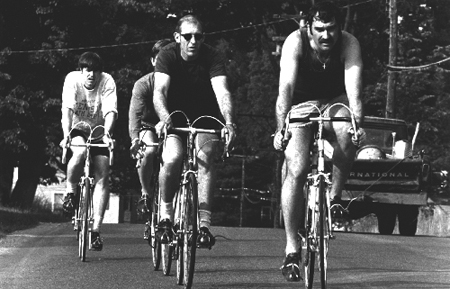 This cast of world caliber characters was soon joined by a long-time bike racer Dick Ring ,who started nightly bike training rides from the Guilford fire station. Of note, Bob Anderson and Dick were NEBC club members, and Dick was up here, during the week, as a pipe fitter working on the building of the nuclear power plant. Bob Gray had his Raleigh, Bob Anderson had his Barali (bought from M. Barali shop in Italy), Dick had his Holdsworth and loaned the rest of us his back-ups.

We soon discovered that no shops around had the tubular tires we needed, along with many other essential and appropriate parts for racing bicycles. So we decided to start our own bike shop. Each family put up $500 and we were on the way. Bob and Barbara had a garage on Cherry Street in Brattleboro for a location, and Neil license plate (and sometime nickname) gave us our original name, Snail Cycles.

The only bicycle distributor that would talk to us was Mel Pinto of Gitane, altough in addition to the bikes he did have tubulars and accessories. We got some Campagnolo stuff from Jerry Baker in Seattle, some Cinelli stuff from Fritz Kuhn in Princeton (via Doug Dale), as well as Campy grouppos, frames, and bikes from Holdsworth in England. After sketching a Putney Bike Club jersey design with colored pencils, and submitting it for approval to the Amateur Bicycle League of America, we ordered them from England.

All Are Equal In The Schoolhouse

We decreed that each family would be equal part-time, partners:
* Bob and Sue Gray were super-salespeople and Bob had expert knowledge in bike racing, in kayaking, and in X-C skiing (although we were not selling skis, Bob knew all the skiers who needed bike stuff)
* Bob and Barbara George were publicity and bookkeeping
* Bob and Becky Anderson knew how to organize, started weekly time-trials, set up races (like the Tour of the Valleys, and the first New England Championships), and knew the background
* Neil Quinn had expertise in inventory and business practices.

Speaking of the Tour of the Valleys... it was 60 miles (at first it was a little longer: it started in Lebanon, NH, came south to cross the Connecticut in Westminster, then over the Kurn Hatten climb, to finish all the way up at the entrance to The Putney School - Doug Dale won the inaugural race, nipping John Allis right at the finish line). We had over 800 riders at the high point, and we did no advertising for the race, just word of mouth. The free beer after the race helped, I guess.

Anyway... back to the shop. 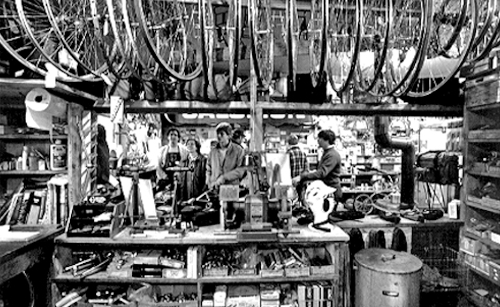 Bob and Sue Gray started a X-C ski shop in the schoolhouse they rented on West Hill, which they called West Hill Shop. We moved Snail Cycles into the schoolhouse, but at that point, it was still a separate venture. Todd Ellis, a bike mechanic, was our first true hire. Bob's father, Ed Gray, became our first ski mechanic. Inventory was kept in a building on Ed's property.

The schoolhouse days produced a lot of activity: Some of the best racers around, the display beehive in the window, the Bianchis we got from Texas with the "28 inch" tubulars, and of course, the Wood stove heating the whole place.

The Full Time Move to Exit 4 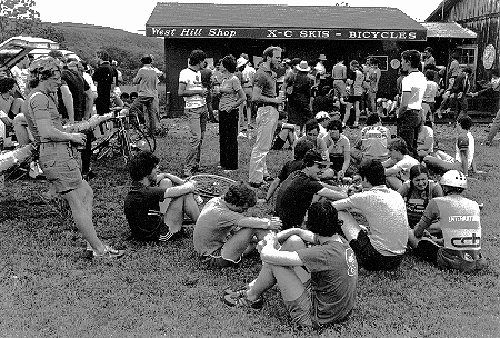 In September of 1973 our conditional use permit for the schoolhouse was challenged, requiring a move. Several buildings at Exit 4 were available and Neil, Bob, and Ed Gray, moved the buildings together with iron-pipe rollers and come-alongs, built a vestibule with wet poplar boards, put up a block chimney for a wood stove, and there we were. Neil built an ultra-strong workbench with a beefy vise mounting (still in place), and continued getting in special tools for the tool boards.